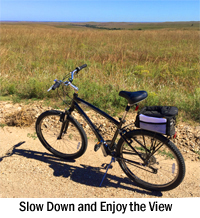 This spring my old grade school buddies from the Pacific Northwest asked me to set up a bike ride in the Flint Hills when they came to Wichita for our 50th High School reunion at the end of September.  A fairly simple sounding request from two bike club regulars used to riding 100 mile jaunts along the coast on their high-dollar road bikes!  They had seen an article about the Flint Hills Scenic Byway and since they consider me the Kansas Flint Hills guru, how could I refuse!

First task on the list was to nix any idea of following the Scenic Byway, at least on bicycles!  Highway 177 through Chase and Morris Counties is a narrow two-lane with no shoulder.  Beautiful as it is, it is no place to try to bike and see the scenery!  We had to hit the gravel roads on fat tires!  The request for two full days of fast asphalt riding, in my mind, became a couple of 20 mile routes out and back from the Byway at a pace designed to show off the quiet beauty of the Hills.  It had to be Chase County and it had to be low key! 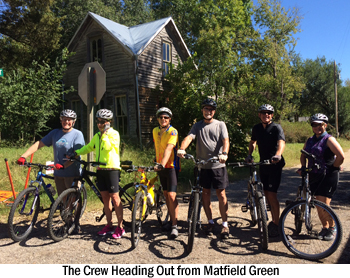 The day of the ride dawned with the most perfect, late September day anyone could have ordered; low winds, upper 70 temps and not a cloud in the sky!  Bikes were loaded onto the trailer and we headed out to Matfield Green, our jumping off place.  If you know Matfield Green, you know there are 5 “exits” on 177, but not a restroom to be had.  My devious plan to add some educational element to the ride included a stop at Pioneer Bluffs Historic Ranch, the old Rogler Ranch house, just 2 miles north of Matfield, for a pit stop before heading out.  The Interpretive Center houses a great exhibit about the Roglers as well as public restrooms when the facility is open.  Visit: www.pioneerbluffs.org for more information.  It is a great place to visit for the weekend programs they schedule or to use for a wedding or event.  The restored barn is worth checking out!  While not always open on weekdays, we happened to luck out.  Work was underway for the annual Fall Festival that was going to be held the Saturday after our ride. 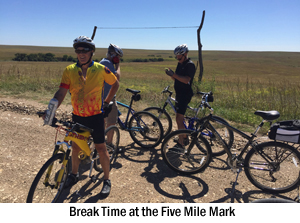 Back in Matfield Green, we unloaded bikes, checked tires and brakes, picnicked along the road and headed east on Little Cedar Creek Road.  Our route took us a mile straight east then on a winding route generally following the creek and up and over the Turnpike to the pristine hills mostly viewed at 80 miles an hour between the Cassoday Exit and the Bazaar Cattle Pens on the Turnpike.  Eastern Chase County, east of the Turnpike, is one of the parts of the Flint Hills that looks like what the Flint Hills should look like.  Rolling hills, tall grass, few trees or roads to break the view and miles and miles of uninterrupted horizon make it one of my favorite drives.  The only difference now was I was seeing it at 8 miles an hour and being very aware of the change in elevation. 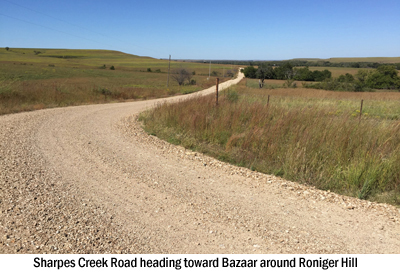 Once over the Turnpike our Little Cedar Creek Road becomes 50th Road and rises eventually to a point that divides the drainage between Little Cedar Creek, the North Branch of the Verdigris River and Sharpe’s Creek, which we plan to follow down to Bazaar.  This high point is home to a large communication tower and some fantastic vistas.  We challenged ourselves to the high point to catch the view before retracing our route about a mile and a half back to Sharpes Creek Road where we were to head north.  The ride down the creek and north to Bazaar crosses back over the Turnpike, wanders through some open pastures, crosses cattle guards and passes some beautiful restored stone homes and busy ranches before ending on pavement.  I was disappointed to see the old iron bridge just south of Bazaar has now been “upgraded” to a nondescript concrete structure, but my old pictures still live! 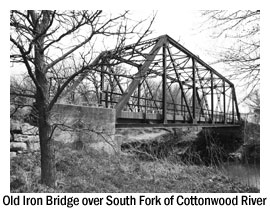 With 22 miles on my bike’s computer, we loaded our bikes back onto the trailer which had been dropped off with my 4Runner at the roadside park up on 177 and proceeded to our overnight at Cottonwood Falls.  In order to have the full Flint Hills experience, I had booked our group of 8 into the Millstream Resort Motel, https://www.facebook.com/pages/MILLSTREAM-RESORTMOTEL/175109766317 , at the north end of town on the Cottonwood River.  This little, homey motel had always intrigued me, so I was glad we had the opportunity to check it out.  The owners, Richard and Sharon Clute, welcomed us in and our evening there couldn’t have been better.  With some snacking and adult beverages on the balcony overlooking the falls and a great steak dinner at the Grand Central Hotel up the street, we refueled and turned in early to prepare for the early morning plans. 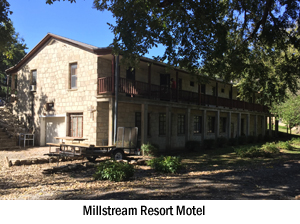 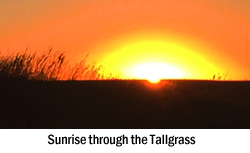 Six o’clock came early and dark, but we all had decided to try to catch the sunrise on the trail at the National Tallgrass Prairie Preserve, just 7 miles up the road.  I had lobbied for the hike and visit to the preserve as another of my devious plans to educate my west coast friends on the beauty of Kansas.  The cloudless sky went from a lightening of night on the eastern horizon to a glorious orange ball and lasted probably over an hour.  It is truly inspiring to be standing in native tallgrass prairie with a herd of Bison over the hill, watching a sunrise and seeing just what the Native Americans had seen many hundreds and thousands of years previous. 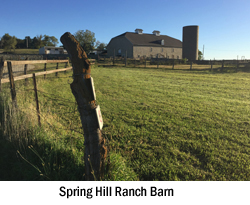 Back at the motel, with breakfast served at the Grand Central, we gathered our riders and headed southwest out of Cottonwood Falls on Spring Creek Road, passing more of the restored limestone homes that have become a popular trend.  It’s funny to say that I miss the ruins that used to be so picturesque.  In the 50 years that I have been driving these gravel roads, I have taken many pictures of the remains of limestone farmsteads only to return to find beautiful country homes growing out of what once was only a shell.  I guess it’s called progress and is good, but I do miss the mystery of the stories they could tell. 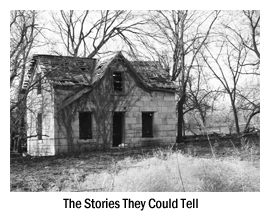 We followed Spring Creek Road until it intersected with Den Creek Road, following that until it met Rock Creek Road and the way back to the Bazaar roadside park again.  Our 12 mile route was a great second day for my old tired legs, but only an hour and a half of entertainment, so we headed north back through Cottonwood Falls to a delicious, late lunch at the Historic Hayes House Restaurant in Council Grove, and a little more Kansas history, before heading back to Wichita and the real reunion events. 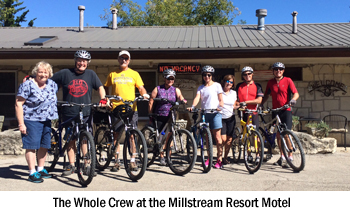 I have to admit that I was apprehensive about biking the gravel roads in the Flint Hills!  I am, after all, a driver of back roads and not a biker.  The closest I have come to anything like this were the “bike hikes” my best friend, Jim, and I would do in the summers of elementary school from our Pleasant Valley Neighborhood to Central Riverside Park in Wichita.  Now, nearly 60 years later, Jim and I and other old friends were back on our bikes riding the Flint Hills!  It was a great couple of days of true Kansas experience and being with life-long friends made it even better!

You know that I have always been an advocate of the beauty to be found on the back roads of the Flint Hills, but I encourage you to try something different and see it from the seat of a bicycle.  You get a whole new perspective and appreciation of the hills and valleys, the wind, sun and sky!  Get out and enjoy!

“Drive or ride some gravel roads in the Flint Hills, stop by the side of the road,

look at the ancient grasses, listen to the prairie birds and the wind in the grass,
take in the full sweep of the horizon, watch the sun and the clouds move across the vast sky
and you will see why I love this land so much.”
by Stephen M Perry