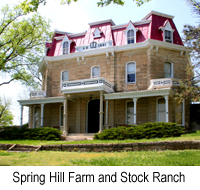 “Louisa, my love, it’s a land where the grass grows so tall that you have to stand in the saddle to see the horizon.  It’s a land of milk and honey, of clear water springs and opportunity.  I’ve heard the rail line has just opened the land for development and we can build our dream from the land itself.”
Can’t you just hear Stephen Jones trying to convince his wife on the merits of moving from their lucrative cattle ranch in Colorado to the Fox Creek Valley north of Strong City?  It was in the year 1878 and news of the raid by Dull Knife and his band of Cheyenne, south of Fort Dodge, Kansas, was making the news. 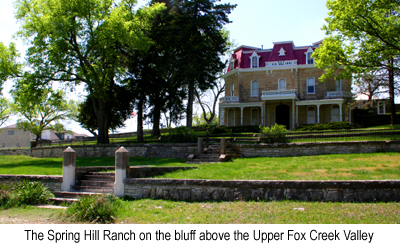 His dream of prosperity in the tallgrass did bring them to the little valley on the Upper Fox where he built his vision into the 7,000 acre Spring Hill Farm and Stock Ranch.  Sturdy limestone, from the land just south of his home site, was quarried, cut and fashioned into a mansion and stone barn of no equal on the plains.  Records show that 30 miles of hand-laid, 5′ high stone walls once enclosed the property. Throughout the years of prosperity, drought, depression and a long list of owners, the vision of Stephen F. Jones has remained tall on the bluff overlooking the Fox, part of the land it rises from, part of a fairy tale dream. 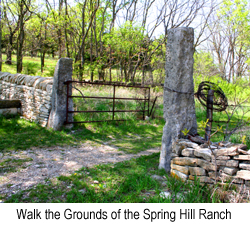 We knew it as the Z-Bar Ranch, and the vision eighty-five years after its construction was no less striking with its maroon mansard a counterpoint to the olive green of the hillsides.  Maybe it was the glow of young love that glamorized the vision as we traveled the winding two-lane road on our way back and forth from college in the late 60’s, but we always watched in anticipation for that first glimpse.  The dream that was once Stephen Jones’ fueled our own dreams of someday buying and restoring a limestone house in the Flint Hills.  We still talk about it to this day, though our dream has now changed to the thought of finding a little, previously restored, stone weekend home that will shorten the drive home from the Wildcat football games and be a family gathering spot. 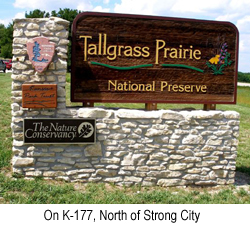 We need to give thanks to the efforts of Nancy Kassebaum-Baker, Bob Dole and countless Flint Hills advocates, from the grassroots Save the Tallgrass Prairie organization of the 70’s, of which I was a part, on to the National Park Trust, National Park Service and the Nature Conservancy. Due to their work and passion, the vision of Stephen Jones and the Spring Hill Farm and Stock Ranch will remain as the Tallgrass Prairie National Preserve and forever stand on the bluff overlooking the Upper Fox Creek Valley as it did 130 years ago.  Walk the hillside, tour the majestic home and springhouse, marvel at the 1881 cattle operation that required such a mammoth stone barn, hike the tallgrass prairie and experience a little of the dream yourself. 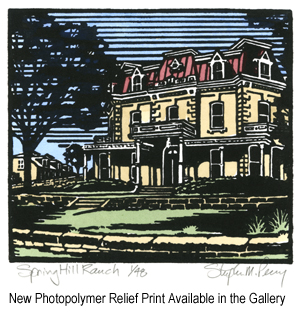 You can find all the information you need for your visit at: http://www.nps.gov/tapr/index.htm.
We also need to commend and support the efforts of Governor Brownback in promoting tourism in the Flint Hills.  The Hills are our own National Treasure.

Drive the backroads, listen to the sounds of the wind in the grass, watch a sunset over the lush green hillside, rumble over a few public road, open range cattle guards and love this tallgrass prairie of ours.