Symphony in the Flint Hills 2009

What could be more glorious than wandering a Bluestem pasture in the Flint Hills of Kansas on a cool, sunny day in June? Try adding a full symphony orchestra, authentic modern-day cowboys on horseback, covered wagons, a roving band of Kanza

Indian reenactors with their Bison hunting encampment, a barbeque beef dinner with beer, wine and 8,000 appreciative Flint Hills fans.  If you are looking for that perfect day of solitude and nature, there are better days to wander the hills, but the Symphony in the Flint Hills is a wonder of organization and pageantry set in the most pristine of beautiful sites!

The site changes each year and the 2009 location was on the magnificent Doyle Creek Land and Cattle Company property, approximately 6 miles southeast of the village of Cedar Point in extreme western Chase County. 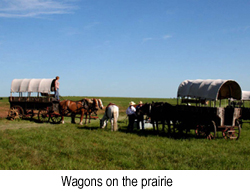 As common with other previous concert sites, the Upper Turkey Springs pasture of the Doyle Creek ranch was a setting of perfection. A scan of the horizon in a full 360 degrees left you feeling like you were in the middle of a rolling ocean of grass with not a man-made element in sight, and there wouldn’t have been except for the massive event taking place around you.  The site was another perfect location, although that in itself causes access issues, the concert and event activities were wonderful and the entire production is something Kansans should support wholeheartedly!

Personally, even though I thoroughly enjoy the symphony event, I like to remember the site of the Symphony in the Flint Hills 2009 as the site I was able to walk and photograph on a warm, sunny day in December of 2008. Emily Hunter, the energetic 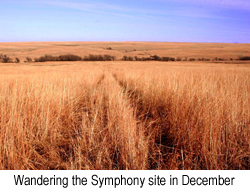 executive director of the SFH organization, who could easily pass as one of the resourceful, steadfast pioneer women of the covered wagon days, called to ask if I would go with her to the selected site to take photos and do a drawing of the location that they could use on their publications.  That day turned out to be a perfect, warm winter day in the Flint Hills. The Bluestem pasture, still holding its tans and russets from last autumn’s glory, was moving with the breeze. The sky was that perfect shade of blue that accentuates the wispy white clouds that stream across the winter sky. 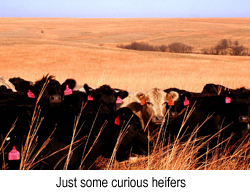 and what we were doing in their pasture. Then, either from curiosity or hunger, thinking we were in the pasture bringing feed, the young cattle herd decided we were more interesting than their Bluestem dinner. Before we could shoot our pictures and high-tail it back to the car, we found ourselves surrounded by a hundred big-eyed, young heifers; the front line having stopped 10 feet away with the ones bringing up the rear literally shoving and jostling to get to the front. Quite unnerving for a city guy, but Emily was taking it in stride with just a “Well, hello girls”. We spent the next half-hour slowly moving the concentric rings of beef over to where we had left the 4-Runner and slowly making our way through the herd back to the pasture gate. All the time we were standing out in the pasture the reasonable part of my brain was telling me to be calm and the peaceful creatures were merely curious about the people who 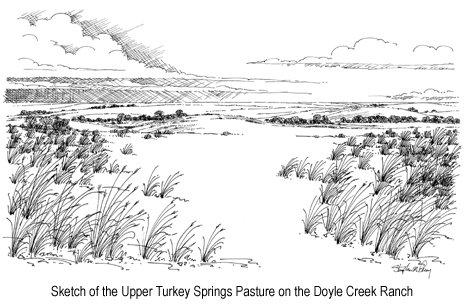 might feed them, but the part of my head that still has memories of the old cowboy movie stampedes that would trample the poor cowboy who had the bad luck to fall off his horse, was saying other things to me! I don’t know how many movie cameras must have been destroyed just to show the devastating effect of being trampled by a herd of cattle!

Fortunately, our day on the prairie ended as perfectly as it began, with the added benefit of a great story! As the sun was setting over the hills on my drive home, I reflected on my good fortune to live near the Flint Hills and to be able to experience the land up close. The Symphony in the Flint Hills may not be a true picture of life in the area, but as an educational experience 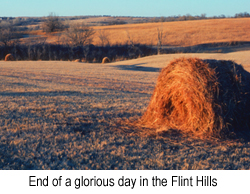 that brings exposure of one of the most beautiful pieces of our country to thousands of people who would not have the opportunity to walk out on the Bluestem prairie and see only grassland from horizon to horizon, I salute the effort and dedication of the Symphony in the Flint Hills staff and the generosity of the landowners for taking their land out of production for a time and putting up with us city folk.

For more information about the Symphony in the Flint Hills, go to www.symphonyintheflinthills.org.