On June 13th, 2009, Cedar Point, Kansas will see more visitors in one day than they have ever seen in the history of their little village located along the banks of the Cottonwood River in western Chase County.  Brace yourself Cedar Point!  The Symphony is coming to town!

To be completely correct, the Symphony in the Flint Hills is coming to a ranch three miles southeast of Cedar Point, but the route to the site will take all 6,000 plus people right through the heart of town, not that there is much more than the heart.  The 2000 Census counted the population at 53, but nine years later, I would reckon that number is somewhat high.  It is a local fact that the Pepsi machine in front of Carpenter’s Garage gets more business than the Cedar Point Post Office!
Cedar Point, now listed by some as a ghost town, was once an active little community.  In 1867, O. H. Drinkwater built a water- 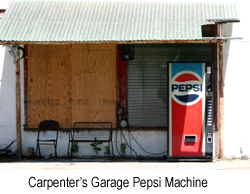 powered sawmill along the banks of the river.  The sawmill was replaced eight years later by a limestone grist mill which remains today.  The Drinkwater & Schriver Flour Mill, known by most as the Cedar Point Mill, operated on that site for over 100 years, producing wheat flour for local and eastern bakeries.  The vacant structure is now crumbling and in need of some major preservation lest the next big flood on the Cottonwood takes it down the river. 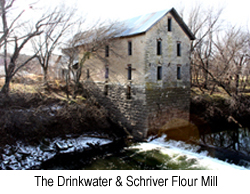 Cedar Point is one of those towns that once had a chance to thrive, but was bypassed by the major transportation routes that bring commerce.  The rail line, once apparently running right through town, relocated along the north edge of the river valley, a mile north of town, and the major east-west highway, US 50, was constructed a half-mile north.  West of town and visible from the new highway 50, an old iron bridge still spans the Cottonwood River on what was probably the original highway.  The bridge, which is still open for traffic, is classified as an eight panel, riveted Pratt through truss bridge and is listed on the Historic Bridges of the U.S. web site.  The periodic flooding of the Cottonwood has failed to take out the sturdy bridge, but time and safety regulations will probably soon do the job. 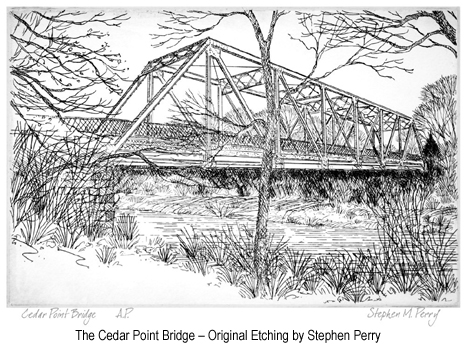 I did a little wandering around town on my visit to preview and shoot photos of the Symphony site.  I had been asked to do a pen and ink illustration of the site to be used on the Patron Party invitations this year and met Emily, their executive director, at Cedar Point.  The entire town consists of the abandoned mill, the Pepsi machine and Carpenter’s Garage, run by lifelong resident Gerald Carpenter, the Post Office, a volunteer Fire Department garage, a tiny City Hall building, maybe one or two other businesses, an abandoned brick schoolhouse, a railroad depot hearkening back to a time of hope for the community and a handful of homes.  There is not much to see in town, but oh, if you could hear the stories!  Stories of hope and dreams, stories of dreams flooded and bypassed.  What causes some towns to prosper and some to dwindle away?  Cedar Point is still hanging on, but may someday become a true ghost town.

For information about the Symphony in the Flint Hills, go to www.symphonyintheflinthills.org.
To read more about the Cedar Point Bridge, you can go to http://bridgehunter.com/ks/chase/90875305401/