The Loneliest Road in America

Looking at the map it’s just a little bit intimidating. 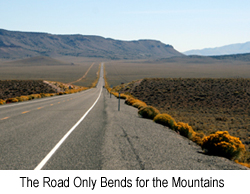 Old two-lane US50 snakes up and down mountain ridge after mountain ridge, across barren flats and meanders through only six towns in 480 miles between Fallon, Nevada, on the edge of civilization, and Salina, Utah, where it joins Interstate 70.  The towns are Austin, Eureka and Ely in Nevada and Hinckley, Delta and Scipio in Utah; not exactly meccas of civilized travel!  I can only imagine the trepidation earlier travelers would have had with vehicles that were not up to the standards of today’s.  Back in the days of the canvas water bags hung from the hood ornament, 4-60 air-conditioning and no cell phones, it was a test of courage.  With my year-old 4Runner, I was more concerned about restroom stops than auto service, but it would still be one long day on the road between decent accommodations.

We left Sparks, Nevada and picked up US50 at Fallon.  A short distance out of Fallon I knew we were driving a unique and memorable US highway.  Lining the highway on both sides, travelers or bored teens had left their mark in the form of names and favorite sayings spelled out with white rocks on the sides of the red dirt ditches.  Some 40 miles east of Fallon, the oddest 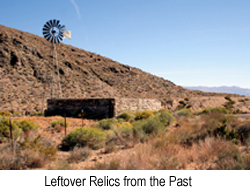 sight caught my attention from the expanse of highway.  I had to backtrack to figure out what it actually was that had caught my attention.  Standing next to the highway, a lone Cottonwood tree was covered with pairs of shoes of all kinds dangling from every branch.  We had run across one of the famous “Shoe Trees” that seem to pop up 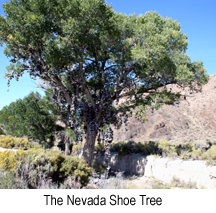 in odd locations for no apparent reason.  Local lore attributes the origin of the shoe tree to a young couple on their way to get married falling into an argument with the result being the young lady’s shoes hanging from the tree.  Since the incident in the mid-1980’s, the number and variety of shoes has been growing steadily. 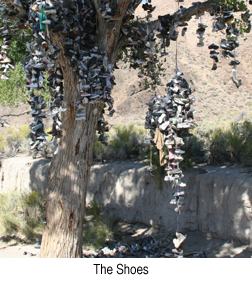 There are actually quite a few interesting sites and stops along the way, including the remains of Pony Express stations, petroglyphs, Charcoal Ovens State Park and the several old mining towns, now playing up the Loneliest Road designation with their Highway 50 Survival Guides.  But, if you have read through other articles on this web site you will not be surprised that for me the best reason to drive the Loneliest Road in America is the magnificent scenery that is laid out in front of you in immense portions.  I remember the highway from my youth.  It is that dramatic!  Crossing over one rocky mountain ridge after another, only to see the band of asphalt running straight across the basin for miles, finally rising up to summit the next ridge, is an awesome sight.  The immensity of the land out there is amazing. 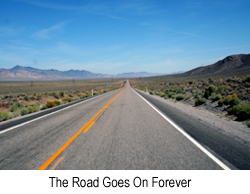 The only disappointment I found driving the Loneliest Road was the fact that it was not the lonely, desolate experience that I had envisioned.  There was much to do and see.  The scenery was spectacular, the driving easy and we were rarely out of sight of some other traveler enjoying the same journey.  Driving the two-lane highways you feel more connected to the land, closer to the native vegetation and much more engaged with the passing scenery.  I can only imagine 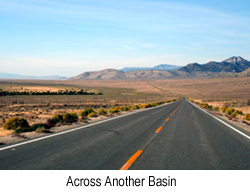 the mind-numbing monotony of crossing the same piece of land on the Interstate highway.  Here’s a tip of the hat to the marketing genius who convinced the Nevada Commission on Tourism to promote the Loneliest Road in America.  It’s my kind of highway!

For more information about the Loneliest Road, check out a few of the many links:
http://www.ponyexpressnevada.com/ponyexpress_loneliest_road.html
http://www.byways.org/explore/byways/2033/
http://en.wikipedia.org/wiki/U.S._Route_50_in_Nevada